Topic of Lecture : PPP in Waste Management : Opportunities, Barriers and Way ahead

The Day 1 of Pragyaan, the Lecture Series in Prabandhan 2010 kicked off with a discourse on the globally emerging field of Waste Management.


Mr. Mukherjee began the discourse by pointing out the two aspects by which we look at management. We have one view which focuses on revenue, income generation and consumption led growth. However, the second view of management is the focus on the impact of this consumption driven growth process on the environment. The world as we see it is driven by the former view leading to sustainability issues faced in the present as well as in the future. 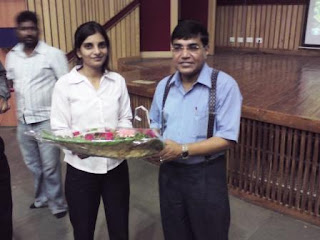 Mr. Mukherjee focussed the attention of the budding managers in the audience to the emerging field of Municipal Solid Waste Management (MSWM). He explained that this field is an important area due to the current proliferation of indiscriminate dumping and no conformance to scientific waste management. These methods followed in many countries globally lead to the generation of green house gases (GHG) along with many other harmful toxics which harm the environment. In this backdrop, the Municipal Solid Waste Management Rules (2000) was setup to govern municipal solid waste management and direct the responsibility of waste management to the municipalities in a well defined framework where the state government plays an enforcing role.

IL & FS played a pioneering role in this area in India. Within a few years, the rampup of waste collection has reached over 3000 tonnes of MSW. The 3 areas of operation of IL & FS in India which were covered by the speaker were the Okhla Compost Plant, Construction and Demolition Project and Gorai Dumping Ground closure. Each of these diverse projects were explained in depth with focus on the initial challenges, the operating issues, the revenue realization, the long term benefits to all parties involved.


The speaker gave an insight into the fertilizer market which was dominated by the chemical fertilizer companies until government intervention created a market for the sale of organic compost to these markets. IL & FS followed a path of tie-ups with major firms to ensure that the synergy will reduce the distribution costs and stabilize the output channels for the compost generated in the MSW site. Mr. Mukherjee enlightened the audience on the improvements in quality standards, management capabilities in waste disposal and revenue realizing opportunities done by IL & FS on entry into this field. The bottomline for this field lies in the revenues from compost sales but relies heavily on the revenues from Clean Development Mechanism (CDM) i.e. carbon credit sales, governed by the Kyoto Protocol. The major players include Asian Development Bank and World Bank which have created carbon funds acting as intermediaries or traders of carbon credits between the polluting parties and the efficient parties. Utilizing this structure, futures trading of carbon credits help in realizing a revenue stream for 10-15 years. This acts as a major incentive to the municipalities which generate revenue by adopting clean technologies as well as to companies like IL & FS which get a share in the carbon credit revenue generated. 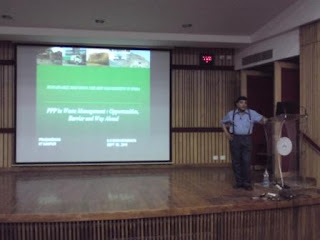 The second type of activity covered by the speaker was Construction and Demolition projects.The rampant dumping of construction material currently destroys the ecology as well as results in health hazards. This kind of indiscriminate is especially seen in metropolises and fast growing cities resulting in a blot in their ecology. Mr. Mukherjee shared with the audience the activities done by IL & FS in this area by the collection and processing of these wastes to produce paver blocks, side kerbs etc which are used by government during road constructions. The latest development in this area was the finalizing of IL & FS by the Delhi government to clean up the entire Delhi area of construction waste as well as MSW prior to the commencement of the Commonwealth Games.


The third area which the speaker provided insight into was the scientific closure of the Gorai dumping site near Mumbai. This dump site was in use since 1972 and was an ecological disaster causing pollution, bio degradation and health hazards. IL & FS came in and undertook the scientific closure as well as the operation-maintenance of this site for 15 years post closure. The revenue realized for this project was through the sale of the futures of carbon credits on top of the government funding for this project. The government also realized futures funds from the Asian Development Bank for this project along with many indirect benefits such as appreciation in the land rates in the surrounding areas.


Mr. Mukherjee elaborated the business case for this venture was first undertaken by IL & FS and only after the success of this model, other companies have adopted similar MSW projects. The benefits are seen for all parties involved as governments get futures funding, debt funding from entities focussed on sustainability funding, land appreciations and fulfilling international sustainability obligations. The companies undertaking such activities also get access to funds from various investment vehicles which focus on sustainability projects and realize revenues through the carbon trading linked to the project. The timelines are longer and the investment in such projects require patience since returns can only be seen after 4-5 years with break-even achieved late. However, such endeavours are perfect examples of the growing importance of sustainability projects which are essential for the balanced progress of mankind as well as the preservation of ecology. Such efforts not only reward from the philanthropic and humanitarian perspective, but also provide revenue generation opportunities through the fast growing carbon credit market.


The speaker wound up by taking many interesting questions from the enthusiastic audience who were treated to a freewheeling discussion on a range of topics which brought out the many facets involved in business feasibility planning, revenue realization, interconnectedness of social issues and government interventionist policies with overall growth of the economy as a whole.