December 12, 2010
Prabandhan, the Annual Management Conclave of Deparment of Industrial and Management Engineering, IIT Kanpur got off to an enthusiastic start on 11th September, 2010. 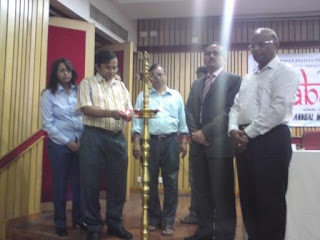 Students from various departments of IIT Kanpur were joined by participants coming from numerous prestigious B- schools. The event was flagged off by dignitaries including present and former luminaries of IME department along with the chief guest of the occasion, Mr.Jayant Krishna, principal consultant, TCS. The event was off to an auspicious start with the lighting of the diya to the strains of Saraswati Vandana by the dignitaries. 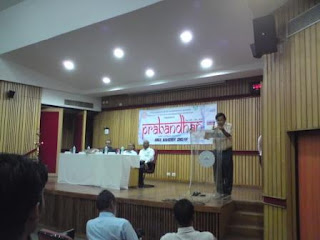 In his opening address to the gathering, Dr. S.C Mishra spoke about the history of the IME Department of IIT Kanpur and outlined the guiding principles which were carried forward by each new batch of MBA students. He expressed the institute’s belief that Prabandhan’10, much like its predecessor last year, would be a resounding success and would focus on some of the core issues which the society is facing. 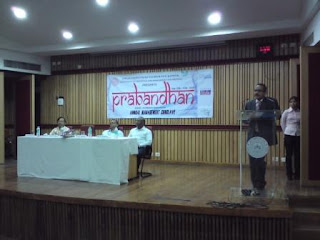 Mr. Krishna, who was the chief guest of the occasion, enlightened the students present about the prospects of social entrepreneurship and the need for sustainable inclusive growth. While he expressed his happiness over India’s blossoming GDP and growing importance on the world stage, he also expressed concern over the growing chasm between the haves and have-nots and highlighted areas where much more needs to be done. Literacy rate, public distribution system, infrastructure development are just few of the areas with ample scope. His vibrant and enthusiastic discourse was very well received by the attending students and dignitaries alike. He also answered queries and clarified various issues the students raised after his address. 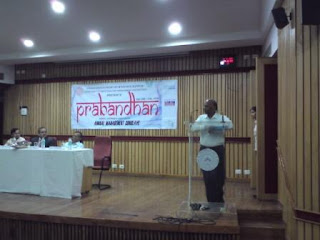 Prof. Kripa Shanker, Vice chancellor, Gautam Buddha University and professor at IIT Kanpur, thanked Mr. Krishna for his gracious presence and expressed hope that the MBA department grows from strength to strength and continues to organize such meetings with more vigor, enthusiasm and energy. He shared with the audience the starting days of the IME Department and urged the students to always set a high bar and constantly try to push the boundaries of potential further with greater drive and enthusiasm.

The opening ceremony and address by speakers was followed by a brain-teasing business crossword which proved to be a appetizer to the challenging Neeti – The Operations Event.

The Lecture Series - Pragyaan also was very informative. Further feeds on that in the next few posts.