December 12, 2010
IME day celebration marked the completion of 35 years of establishment of the IME department in IIT Kanpur. 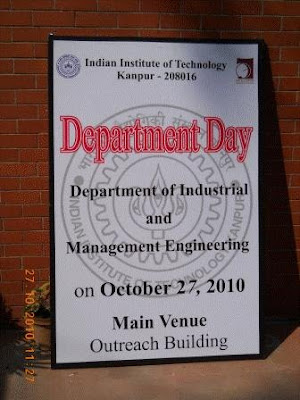 This day was made special by the presence of our prestigious faculty members like Prof. Sadagopan, Prof. Kripa Shanker, the alumni of IME department, the long term staff members and students accompanied by a lot of other folks. This event coincided with the informal inauguration of IME Building, a dedicated building with the state of art facilities for the IME department. 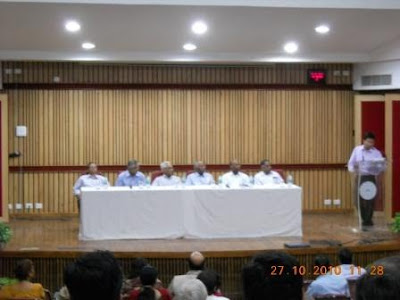 The mood became nostalgic as Prof. A.K. Mittal, who has been associated with IME department since its inception, shared his journey with the department since 1975 with 3-4 students to the current size of approximately 120 students pursuing diverse courses like M.B.A., M.Tech and Ph.D. 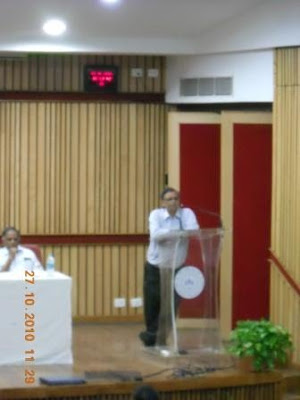 Prof. Mittal shared how the department was branched off from the Mechanical engineering department and prospered under the visionary leadership of Prof. Batra and Prof. Mittal himself. Initially, the department offered only M. Tech and Ph. D. courses, till the MBA program was introduced in 2001. As the department grew, new faculties were hired starting with Prof Kripa Shanker, who is currently the Vice Chancellor of UPTU along with being a faculty in IME department. A little later, Prof. Sadagopan joined the department. Further down the line, faculty members from IIMs and other diverse backgrounds were recruited with the inception of Prof. RRK Sharma (who’s ranked among the top intellectuals of the 21st century) and Prof. Rahul Varman. Soon after industry experience was inducted with Prof. Jayanta Chatterjee, former CEO of Allen Bradley joining the ranks. Prof. Sadagoppan and Prof. Kripa Shanker also shared their association with the department through anecdotes of their life in the IME Department.


This was followed by the alumni sharing their cherished memories with the department. Mr. Madhav Negi, one such alumnus of the 1998 batch, shared his moments of closeness with the members of faculty. He recalled how the IME department promoted the feeling of belongingness within him. Also, he shared his happiness as most of the initiatives which he took, way back in those days, have materialized in to pride of IIT, like the magazine started by him and the student mail initiative. Other alumni also shared the role of the pedagogy imparted by the department and its role in the success they have achieved in the corporate sector.

Audience was enthused by the interaction with faculty and alumni. Post lunch, the action shifted to the new IME building where the Poster competition was held. Insightful posters prepared by various students of the department showcased many methodologies adopted to deal with industrial and management challenges in the current scenario.

Dr. Chatterjee moderated the discussion.The discussion began by understanding the basis on which management education was introduced in IITs.
Differentiation of IIT wrt Mgmt schools - Research oriented thrust vs curriculum based thrust

Prof. Sadagopan pointed out that management is more technology driven,more technically challenging and hence needs to have a technical thrust which is ably provided by IITs.


Prof. AP Sinha added that IITs are univ which are liberal to pursue management with a mix of technology, management and liberal arts.Management in IITs is more action driven vis a vis the engineering depts.

Mr. Madan brought in the industry perspective by saying that Companies now promote both vertical and horizontal differentiation. Learning is more by experience but built on foundation of technology and learning. Specialization needs to be cultivated on job but can be promoted through the internship programs and with an action oriented course structure.

Adding to above Prof. AK Mittal said, Management is more related to enterprises and organizations. Education has broader perspective as compared to experience due to its ability to analyze, observe and apply the acquired principles. Education can be used to hone and train in a niche discipline. Management requires environmental knowledge, contextual application of the knowledge and ability to deal with multi-contingency situations. IITs should concentrate on those areas where technology is a major resource. However, education cannot be truly classified and distinguished into diverse fields like technology,arts,science.

The audience on their turn asked the elite panelists that whether it is right to restrict entry into the MBA program of IITs to only engineers. They felt that a batch with diverse background is better than an all engineers batch for an MBA class.

Prof. AK Mittal in his response conceded that diverse thoughts and diverse disciplines would contribute better to the thought process of management students in IIT. However, the restriction is due to the courses which are more engineering intensive and thus a heterogenous batch may become more of a liability. In principle, it had been agreed that the batch should be diversified in the future. But as of now, homogeneity has been promoted by the senate ensure quality.

Prof. Sadagopan pointed out that the number of engineering graduates in the country is very high. In his prompt response he said, "Whatever we do, engineers will be in large percentage anyway. To a larger extent, the quality of the students also is greater in engineers." He said, the other disciplines are largely populated with those students whose first choice was to become engineers but couldn't become one. Even IIMs find it very tough to develope heterogeneity.

Prof. AP Sinha in his response to the diversity question noted that the Academic Senate was not the only reason for this lack of heterogeneity. Liberal arts and open action oriented management need less structured approach and bit more creative and unstructured approach. The faculty and the course structure were perhaps unable to deal with students of liberal arts. Hence, IITs select students who have developed a more structured learning approach.

In his closing remarks, Mr. Madan said, "Learning is not only restricted to our batch. We can learn from the other departments here as well. We can easily get a diverse perspective in the campus itself."

Dr. Chatterjee concluded the discusion by appealing to the comparatively younger audience to ask compelling questions and to approach every situation, every contingency with a positive frame of mind.