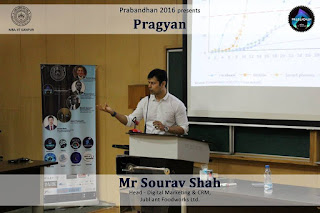 The second day of Prabandhan witnessed a seminar by Mr. Sourav Shah (Head Digital
Marketing and CRM,  Jubilant Foodworks) as part of the guest lecture series Pragyan. The prime
emphasis was upon Digital Marketing- A key perspective and future.
The seminar began with some interesting and insightful discussion on the Digital adoption rate
vis a vis the traditional media like TV, print media, telephone etc and it was concluded that
digital media had seen a far greater adoption rate than any other. Sir strongly emphasized that
going digital was the way to go for present and future marketers and it would be the most crucial medium and competition platform for business. Being innovative and proactive in the digital
space would be quintessential for competitive advantage very soon if not already. Sir bolstered
this argument with several examples such as Whats-app, Facebook, smartphones etc each of
which had offered unique value propositions and were being adopted at a rapid pace not just by
people but also by businesses.
Sir cited the case of an insurance company which despite having a relatively lower share in the
conventional agent based insurance market managed to create a niche for itself in the "term
plan" insurance by taking and promoting it online. Within a period of two years the insurer
became the largest insurer in the Indian digital space. This was made possible by exploiting the
reluctance of conventional insurance agents in selling "term plans" & combined with some smart
digital marketing to improve the reach to the customer; and the results had been overwhelming.
Sir extended the discussion into the cost effectiveness of digital marketing over conventional
marketing. The equivalent effect of a traditional TV advertisement costing billions could be
generated by systematic online target marketing in merely one hundredth of the cost. Sir added
however that unlike traditional marketing media, digital marketing worked mostly on the pull
mechanism and thus thrived on creativity and innovation to reach the target audience.
Talking about the scope of digital market in India, he indicated that the number of internet users
in India was 462 million while the internet penetration was only 30 percent. This gave immense
virgin opportunities to companies like Facebook and Google who had also been seen competing
to launch & Internet.Org and & Loon projects in India.
Sir apprised us that the presence in digital space was exceptionally vital for any company. Even
if the selling channel of a company was not online, its presence in the digital space in the form
of reviews, websites, social media etc had become an integral part of its existence. S.E.O.,
S.M.O., S.E.M., YouTube, emails were some of the digital marketing tools discussed with each
one being equally significant.
In context of Domino's, he updated us that through the use of digital medium Domino's had
been able to increase its target base, reach customers in a much more significant manner,
increase its brand equity and also track and optimize the business through the use of analytics.
The job of digital marketer was about reaching the significant audience.
Sir concluded the lecture by citing various live examples of smart digital marketing which were
unequivocally applauded by the audience. The seminar was a great learning experience wherein students got various insights on marketing media and channels of digital media and
their roles in brand promotion.