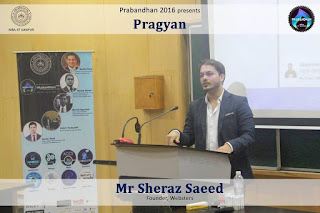 Prabandhan 2016 organized Pragyan, the guest lecture series of IME Department, IIT Kanpur. The series was kick-started by Mr. Sheraz Saeed, Founder of Websters. Websters is a Dubai based social media company started in 2011 and specialized in web designing and digital marketing. It is a part of SoftAge Information Technology Ltd.

Mr. Saeed gave a seminar on “Start ups and Digital Marketing”. Giving a brief overview about himself Mr. Saeed mentioned how during his final year at BITS Pilani, Dubai campus he saw a requirement for web services in the Dubai market and from initially beginning as a freelancer he founded Websters, which offers a range of dedicated social media services along with other digital assistance in web development, app development, social media management, analytics, digital marketing etc.

Mr Saeed engaged the audience by probing about some start-up ideas. To the passionate budding entrepreneurs who had such ideas and the audience in general, he gave an interesting trivia, of discussing an idea with a group of friends on whom you could rely on for feedback before converting it into a business plan. He also encouraged some of the students to proceed with their ideas and work towards bringing it to the light of the day. Further he advised those keen to have their start-ups to always keep founders with different skill sets and at the same time have an eagle’s view of the entire initiative. 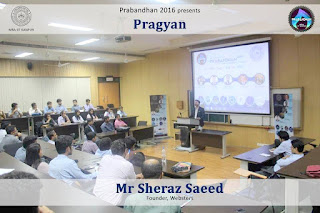 Dwelling further on the topic of start-ups, he mentioned an exorbitant number of start-ups do not recognize ‘need’ and sweat relentlessly on solving a problem that does not exist. He also cited this as being one of the reasons behind the failure of many start-ups after a small stint.  Mr. Saeed also emphasized on the pioneer versus follower strategy in marketing, by providing an example from the e-commerce sector in Dubai. The small and new entrants learned from the mistakes of giant players like Cobone and Groupon and differentiated themselves to become stiff competitors. Thus it is important to push forward the right and required needs into the market.

Moving onto the topic of digital marketing, which also happens to be Mr. Saeed’s area of expertise, evident from his clientele of big names like Zee, Dubai government etc, he shared with us exciting examples where digital marketing was instrumental in garnering millions of eyeballs. He gave examples like the post of one of the Zomato’s co-founder, Oreo’s post after a few seconds of power cut at Super Bowl XLVII etc. Mr Saeed also insisted on not entirely focusing on search engine optimization, but evaluating the investment in paid apps and likes , and also imperative is the creativity in digital marketing, thinking different and utilizing unseen opportunities to stay ahead in game.

The session was a lesson on introspection before jumping on the start-up bandwagon and how digital marketing is changing the marketing landscape with its vitality felt in the sustenance of any company worth its salt. 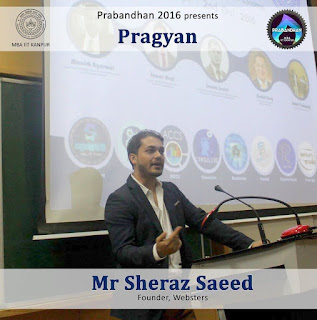