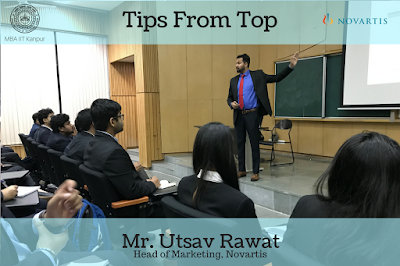 In the 21st century, a brand must understand their customers' root motivators in order to make the kind of value-based connection that is increasingly important to the modern consumer. To provide students with insights on this prevailing topic, Department of Industrial and Management Engineering played host to a seminar by Mr. Utsav Rawat, Head of Marketing-Novartis, who has a decade of experience in the health industry, to talk about value based marketing in Pharmaceutical Industry in India.

The seminar began with Mr. Utsav talking about the innovation giants, Apple and Tesla, who have redefined marketing as seen by the world with their unique approach and perspective. While talking about pharmaceutical companies, he said that on average, each company globally spends 8000-10000 crores on research and development and approx. 15% on marketing. He emphasized on the role regulation plays on innovation in healthcare industry.

While talking about difficulties for marketing in healthcare, he stated that unlike other industries, the decision maker, user and buyer are different in healthcare industry, which makes it difficult to market the products. He then walked us through evolution in pharmaceutical industry in India. In pre-1970 period, market was dominated by MNCs and there was absence of organized Indian companies. Indian Patent Act-1970, changed the face of pharmaceutical industry in India. India realized its core competency was in manufacturing and hence focused less on R&D. The span of two decades after 1980 was golden era for Indian pharmaceutical industry. Process development, export initiative, research orientation and production infrastructure creation set off the industry to the next level. Since the advent of 2010 the industry is now focusing on consolidation to reduce R&D cost and work for the well-being of customers. Big Indian players and MNCs are merging while sharing their core competencies to reduce the overall cost of the product. Consumer perspective has also changed in the 21st century, from adding years to life to adding life to years.

Mr.Utsav then explained how the industry trend in marketing has changed from sales in 1920s, to marketing in 1980s and eventually to value based marketing in 21st century. While giving an example of Starbucks, he mentioned how higher value creation leads to higher share of the wallet. India has got most FDA US approved manufacturing sites outside the US, implying that the global industry entry barriers are not strong anymore. Earlier it used to be only three people in the value chain, while now there are multiple stakeholders in-between who are equally important and they need to be the part of value creation.

Talking about converting a commodity to a brand, Mr.Utsav again went back to the Starbucks example, whose value addition is more than 2000% in the entire process. As he stated, "In case of product, don't be needy but be greedy."

At last, Mr. Utsav shared his the learning from real life marketing issues while sharing some industry examples. He said that one should have an approach of converting challenges into opportunities and changing the forces of the market.

Today, a company should be quick enough to figure out what resonates with their customers. Mr. Utsav concluded the seminar on a motivating note saying that a marketer should always think of what disruptions he can bring into the market. 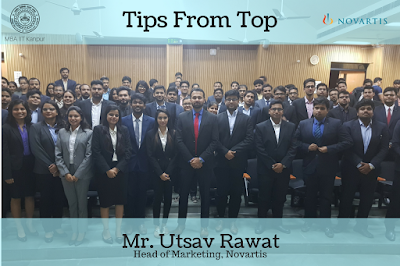