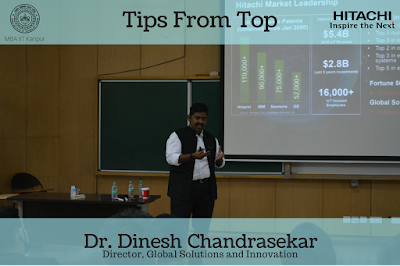 The Department of Industrial and Management Engineering, IIT Kanpur played host to Dr Dinesh Chandrasekar (Hitachi Consulting) for a lively and informative seminar session on Disruptive Technologies for ‘Digital Desh’.

“The Best way to predict the future is to invent it” With this quote from Alan Kay, Dr Chandrasekar proceeded to talk about the disruption that was being brought upon by the software designed businesses, and the wealth of opportunities it has churned up for young management graduates and technocrats to showcase their talents. Expounding upon the generational shift and exponential increase in innovation that has happened over the past couple of decades, he gave two revealing examples which highlighted how the rise of technology has accelerated growth. The contrast between the Moon missions by NASA, which involved immense human effort and economic capital expenditure over a period of 8 years versus the Team Indus - a small team of technocrats from India in the present who built a Moon Lander in a 3 years with a fraction of the resources, showcased how advancements in technology have hastened implementation of newer, innovative ideas into reality, in timeframes and costs unthinkable in previous eras. Furthermore, talking about the immense decrease in adoption times of newer technologies among people, Dinesh gave the example of the time it took for various modes of communication and mass media to reach 100 million user base. The numbers were revealing - while it took radio 38 years to achieve that target, a completely new mobile telephony entrant (JIO) achieved the same figure in 170 days.

With the rise of disruptive players like ‘Jio’ in the Indian digital communication sector, the speaker then talked about how Digital India was becoming a reality, with immense growth being shown across all segments of the sector. He described how this growth presented prodigious opportunities for innovation, particularly mutant innovation, as seen in markets such as China, where local, innovative players adopted international ideas and created fresh new segments for themselves in a booming market. Moving onto the consequences of such innovation on legacy companies, he talked about how it presents a grim scenario for companies which are not willing to adapt and inculcate innovation in their production and management strategies. Quoting an article by Washington University, he explained how 40% of the current Fortune 500 firms will cease to exist because of digital disruption.

Moving on from the consequences of disruption, Dinesh also talked about how modern technologies such as IOT could help businesses survive and thrive. Stressing particularly about the importance of IOT in modern industry, he gave examples from a variety of projects of Hitachi Consulting to showcase how IOT technologies could be implemented in a wide range of sectors, from retail to public safety to health services to the automotive sector. Further detailing IOT solutions, he gave several examples from his own experience in the fields of predictive maintenance and smart city projects, endeavours in which IOT technologies provided solutions which weren't possible with legacy, unconnected technologies.

The audience was then treated to an interactive Q&A session, in which the speaker answered queries on a wide range of issues. From voicing opinions on future of automation and its consequences on human careers, to providing insights into how such developments would reassert the importance of human critical thinking and creative skills, Dinesh also highlighted the need for constant learning to stay ahead of the curve, saying “ Don't be a know it all, be a learn it all.” The session proved to be highly insightful and was deeply appreciated by the audience. 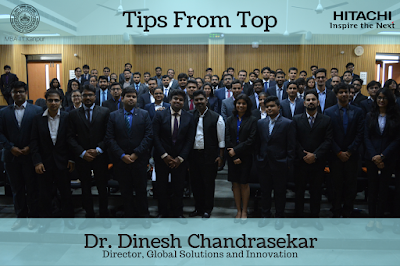