Mr. Sheel discussed the various aspects of global financial crisis, its causes, structural changes through the world economy and the rise of G20. Besides this, some key takeaways or lessons learn in terms of policies implemented during crisis and its significance for India, the ways in which this recession has affected the globe and how can G20 help world back on its pre-crisis growth curve were discussed.

The major incidents which preceded this crisis were low cost of capital, increasing risk tolerance, low interest rate which discourage savings and encouraged leverage and finally, lax financial regulation from US government. But, the major event which triggered of this domino effect was US subprime housing crisis. Although, subprime housing loans form a very small part of US housing market, which in turn is a small part of US financial sector, it caused a crisis which US has never witnessed since the great depression of 1929. The major reason for that is most of the things were inter-related in this globalized world. The fact that most of the subprime mortgages were mixed with various other securities to launch Collateralized Debt Obligations or CDOs which were frequently traded among the various wall street bankers is well illustrated by the below picture. The problem with these loans were that they were distributed to many of the people who were incapable of paying them. They bought houses using these loans thinking the prices can only go in one direction, northwards. But, they suddenly found themselves in a soup when the interest rates of their floating rate loans increased. Suddenly, their housing equity became negative which forced them to leave the house as it was worth less than what they had to pay for. Also, during the short boom when their housing equity was positive, Wall Street firms left no stone unturned in saddling these guys with debt. 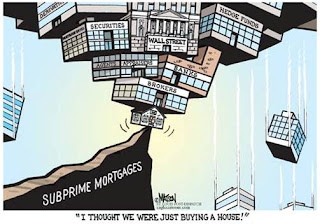 Another reason given for this crisis has been globalization. The capital which aids globalization is highly mobile and keeps on shifting to search for low cost raw material, cheap labor. This has lead to China becoming a manufacturing hub with more than 40% of US companies profit coming from that region. But, the problem with this kind of growth is immobility of labor because of which their employment suffers. The corporations and their few owners earn lot of profits from outsourcing, but, the local employees are left behind without jobs and sources of income. They are forced to lead their lives on borrowed money. This has been one of the reasons why US debt has increased to the highest ever peace time level i.e. more than 80% of the GDP in late 2000s.

Apart from this, the Glass Steagall Act which was introduced in 1933 to stop speculation in market after the great depression was withdrawn in 1980.

This recession was tackled by using various fiscal and monetary stimulus as per Keynesian economics. These included various quantitative easing measures like reducing interest rates to effective zero and purchasing short term government bonds. The problem with such policies are most of the tools have been blunted by rampant globalization and lack of market levers which are still controlled by the government. But, the coordinated efforts at the G20 levels ensured a coherent policy response at the world level has definitely stymied this crisis.

The aftermath of this crisis has been increased leverage across all the countries and cyclical debt traps may extend beyond the PIGS. According to Ken Rogoff, “the current debt levels in developed countries are unsustainable and are impairing growth. The most part of US debt is financed by countries like China and India, by maintaining sufficient foreign reserve of globally accepted currency. This is a kind of paradox as in classical economics funds are supposed to flow downhill, but, in this they are flowing uphill from developing to developed economics who are trying to fuel their consumption driven growth through high levels of public debt.

According to most of the experts, India can become a biggest economy of the world. As per William Buiter, “India can surpass China as largest economy by 2050”. This can happen due to India’s younger population and Indian government emphasis on developing knowledge based economy. According to the Economist, “India will add 136 million new workers as compared to 23 million expected from China”. To achieve this, India must use G20 forum to its advantage by ensuring greater roles and responsibility for itself at the world level.

The audience was really appreciative of the depth and breadth of knowledge and the ease with which Mr. Sheel conveyed complex financial situations and brought a fresh perspective to it. Finatics lecture series started off with a flourish thanks to him.