Ms. Shivani Datta presided over the talk about CARBON MARKETS and CDM among an eager and enthusiastic student crowd. She started off her talk by reiterating the present Global concern about over-consumption of resources, contribution by industry on climate change, how the roadmap was laid particularly in the last two decades to tackle Climate Change internationally through various summits organized by UN starting off with the RIO Earth Summit and birth of UNFCCC in 1992 and how the KYOTO Protocol got its acceptance worldwide in 1997 till the end of its first commitment period in 2012. The green house gases and its global warming potential over the last century was also enumerated thereby giving a brief summary of the articles to be followed and the roles of both the developed and developing countries according to Kyoto Protocol. This is where the speaker started highlighting what CDM is, its features, specificity and the challenges faced by it.
Clean Development Mechanism which is one of the mechanisms under the Kyoto Protocol allows a country with an emission reduction commitment and to implement an emission reduction project in developing countries. Such projects allow a company to earn Certified Emission Reduction (CER) credits which is saleable in future thereby meeting the Kyoto targets.
The twin purposes of CDM are
1. To assist developing country parties in achieving sustainable development.
2. To assist developed country parties in achieving compliance with part of their quantified emission limitation and reduction commitments under Article 3.
The features of CDM were broadly CERs, Market driven, Eligibility timeline, sustainable development and GHG reduction. Another concept of Additionality was introduced which is a fundamental issue in the carbon offset market. In order to determine additionality a project should have been started after January 2000 with due consideration of CDM at the start of the project. Several questions were raised doubting whether ‘financial additionality’ exists, how it would benefit other projects and how it would help in alleviating the barriers. 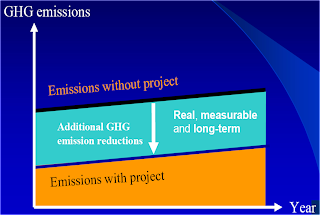 The various steps involved in Additionality are
 Identification of alternatives to the project activity
 Investment analysis
 Barriers analysis
 Common practice analysis
An investment analysis is basically done considering the factors like project returns with CDM revenue and without CDM revenue, Internal Rate of Return Hurdle rate and the CDM cash flow after which the CDM Project Cycle is implemented. According to IPCC’s 4th assessment report (2007), the Global Sectoral Emissions constitutes for about 45 % by Energy Supply and Industrial emissions. A few generic CDM Possibilities are in Energy Efficient Projects, Infrastructure Projects, Renewable energy & Fuel Switch Projects, Plantation Projects. According to current statistics there are 2950 projects which are registered for CDM implementation till date and more than 5600 projects are in the pipeline.
In the final part of the talk the speaker highlighted about CER Trading and its value accretion curve and finally wound up with the challenges faced by CDM like uncertainty, evolving procedures at each Executive board meeting, stricter validation, and unclear framework after 2012 and the pricing of CER.
Finally the curtains came down with her last words quoted by Mr. Paul Kelly that “Carbon is the currency of a new world order”.