A talk on “Right to Information Act: Path to Swaraj” 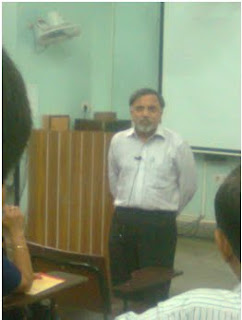 Swaraj, or self-rule, a concept propagated by Mahatma Gandhi, is integral to our idea of a democracy. The freedom struggle was, in effect, meant to realize the same. But did Independence actually bring about a sense of self-governance?
What kind of democracy are we living in? Does the concept of individual sovereignty still hold any value for us?
In the talk on the “Right To Information Act: Path to Swaraj”, a lot of such burning questions were raised, and some of them were answered.
IIT Kanpur organized the talk by the Information Commissioner - CIC, Mr Shailesh Gandhi on the 7th of September 2009.
Mr Gandhi presented an eye-opening view of the current state of democracy in India: talking about the differences in a participatory and an elective democracy, and created awareness about the RTI act amongst the audience.
The RTI act empowers the Indian citizen to monitor the Government individually in large numbers. Some of the salient features of the act are:
1) It makes a public servant accountable. All the citizens have to do is pay Rs 10/- to get information on the Government’s actions and decisions.
2) The RTI act can be used to obtain information from all government bodies, bodies controlled by the government or having substantial investment by the government, or any institution established by an act of Parliament.
3) The law mandates that the information has to be given in 30 days.

This simple act wields enormous powers. If each one of us files even one RTI application every month, the sheer volume of these questions will be enough to ensure that all government servants do justice to their roles and responsibilities. After all, lack of accountability breeds complacence and corruption.
Mr Gandhi explained the procedures of using the Act to force the concerned organization to act, using a lot of real life examples in which the RTI act has been used to bring people/agencies to book. In the end, the problems faced by several members of the audience while exercising the Act were discussed and an attempt was made to answer all the questions posed.
The lecture was informative and inspiring, and it left the audience enabled and empowered to use the Act to bring about much needed change in the governance of the country!
About the speaker –
Mr Shailesh Gandhi is a B.Tech from IIT Bombay, following which he setup a plastics packaging small-scale unit in 1972. Mr. Gandhi established Clear Plastics Limited in 1980 employing 500 people and using only indigenous machinery. Known as an innovative entrepreneur, he designed and supplied plastic bottles and caps to some of the best Companies in India. In 2003, Mr Gandhi sold his business to work for Right to Information. He has been the Chairman of the IIT Bombay Alumni Association for 3 years. With a number of accolades and awards under his belt (described below), he is an inspiration for one and all, working for the betterment of life and reducing corruption everywhere.
Awards –
i) Distinguished Service Award and the Distinguished Alumnus Award by IIT Bombay
ii) The Nani Palkhiwala Civil Liberties Award in 2008.
Furthermore, Mr Gandhi was in the forefront in the Satyendra Dubey case and is a prolific user of the RTI act to uncover a lot of social corruption issues, such as:
i) Inform citizens about the details of the Maharastra CM's Relief fund
ii) Stop giveaway of Public money of over 1000 crores in redevelopment of Crawford market
iii) Curb political interference in Police transfers.