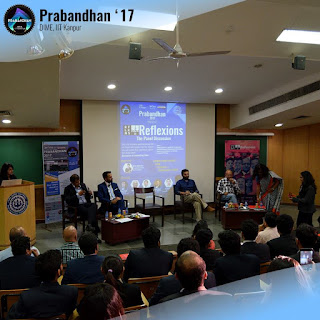 The flagship event of the 6th edition of Prabandhan, presented by Department of Industrial Management and Engineering, Reflections was nothing short of delightful. Upon the scene of the setting sun,  The event opened with an environment of tense expectations, keeping the audience on their toes with complete attention on the dais. Reflections saw participation of 6 eminent personalities and thought leaders of their respective industries in Mr. Sreeji Gopinathan from Reckitt Benckiser, representing the FMCG industry, Mr. Utsav Rawat from Novartis representing HealthCare and the Pharma industry, Mr. Satish Mittal, ex-CTO of Vodafone, heralding the telecom industry, Mr. Dinesh Modi, of Eros International representing the entertainment industry and our very own Dr. Devlina Chatterjee, an insightful member of the Department of Industrial Management and Engineering representing education and academia, moderated by Ms. Mitali Mukherjee, Co-Founder and Editor at Money Mile, a charismatic leader in her own right. Savants of their respective fields, these eminent architects chose to describe to the crowd at IIT Kanpur, the respective trends in the fields they represent and the external factors that have an effect on the maneuvers corporate structures make towards development. Mr. Rawat emphasized on the second wave the renaissance and reinvention of the new industrial revolution that converges technology with sustainability, the same factors that have helped the healthcare industry retain its growth juggernaut while Mr. Gopinathan emphasized on building with the right intent for the long run, with patience among the rural populus who embody the social fabric of the nation.  They reassured the student community present that modern day India with its immense demography presents boundless opportunities in terms of outreach to truly reinvent the focus and mileage of growth. Dr. Devlina pointed out that such growth comes with a responsibility among the educated and financially stable who would then take up the onus to represent the opinion of the masses and drive ‘inclusive growth’. The driver of such responsible growth should be one considerable step at a time, where Dr. Chatterjee, Ms. Mukherjee and Mr. Mittal brought up excellent examples from their experiences where the rural segment has not kept pace with the ever-changing global landscape of technological upgradation and their requirement was at a much more basic level such as the absence of covered toilets or even electricity. This represents a completely different perspective than the one offered by the urban community which has moved away from money to comfort. In such a varied landscape, it is the right time for the Gen Y to step in, as Mr. Mittal so eloquently put forth. The discussion veered towards the distinct lack of jobs in the market, with figures threatening the ever looming downturn, and the collective suggestion was that the onus was on the true thinkers who could identify the pain points of society. The opportunities to collectively address the entire spectrum of root causes that evolve our cognizance of the real pain points in the society. The panel also spoke extensively about the bridge between academia and its applications, the paradigm shifts that the jugaad culture could see, if India had the gumption, patience and brawn to take the leap of faith at the right time, and most importantly the responsibility to identify the right problems to drive inclusive growth among the entire country as a collective, even bringing forward candid examples from their lives and answering queries from the crowd. The students were overtaken by a rush of belonging to the India that represents a truly bountiful land of opportunities with its immensely large demographic of 1.3 billion and reflected upon a possible change in thought processes can help the new-age techno-managers that MBA IIT Kanpur stands for, take the under-developed core engineering industry from strength to strength with the support of the existing governance. Ideation and job-creation was the call of the hour, and the audience went home to the thoughts of a completely new avenue of career-building where exploration and daredevilry in the corporate landscape were strengths and not blockades into driving socially responsible growth for our nation. Reflexions, the flagship of the new look meaner and ambitious Prabandhan, provided this immense learning experience, which rightfully closed to thunderous applause.