February 27, 2016
Mr Harshvardhan started the seminar giving an overview of the different waves of e commerce that have come from time to time. It started with Microsoft in 1995 and soon reached India with Shaadi.com. The next wave came around 2005-07 when Alibaba started a Market place model in China. And the last wave came after 2007 which we witness now. 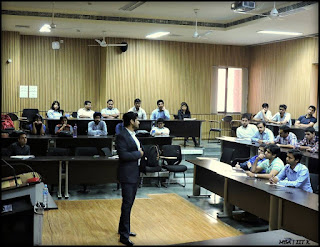 Sir explained a fundamental concept of Selection Arbitrage which means when a particular product is not available in geography, it creates a demand. And this is what was leveraged by Amazon initially and further by Alibaba in China. China being a significantly diversified country, Alibaba addressed the selection arbitrage problem by providing a channel of communication between the small scale retailers. It was further comprehended by an example of Amazon and Wal-Mart, mentioning that Wal-Mart has been operating on a warehouse based model and Amazon saw this as an opportunity to reduce the inventory and warehousing cost by introducing the online model which in fact became a major breakthrough in e commerce industry.

Further sir gave a brief about the Indian retail industry with e commerce accounting to a surprisingly low figure of less than 1 percentage out of which 70% is taken up travelling tickets only. Another interesting irony shared by sir was that although the penetration rate of internet in India is 19% compared to US having 82%, still the number of internet users in India are almost three times that of USA. And this is the reason retailing in India is tapped as a best investment opportunity.  Related to this one of the fascinating term that sir also made us aware related to C2C retailing was homepreneaurs.

As the seminar went ahead we got to know various aspects related to Indian Ecommerce industry which differs from other countries. One of them is the mistrust that Indian customer usually has on the payment gateways on ecommerce website and the other is psychological mindset of getting discounted products.  In addition to that we also came across various logistic related terms, logistic costs, how logistics in India is different from other counties and handling the same in shopclues.
The seminar came to an end with certain facts related to Shopclues, their inventory model, warehouse, supplies, logistics, targeted market, and vision for 2020.

Thank you so much sir for sparing your valuable time with us. It was indeed a great session and learning. 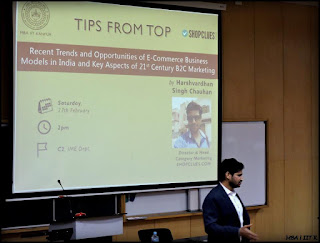