November 04, 2011
Prabandhan 2011, the annual management conclave of IME, IIT Kanpur was organized on 29th and 30th October 2011. This year’s ‘Prabandhan’ was based on the theme: Innovation. The conclave encompassed a wide range of events and activities such as guest lectures, online contests and a workshop based on Innovation. 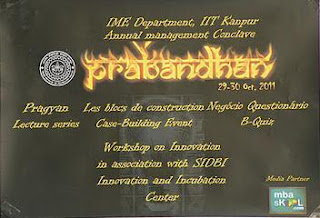 The event flagged off with the opening address by Prof. N.K Sharma, who talked about various facets of Innovation based on his experience, and wished Prabandhan 2011 a great success. Mr. Vishal Sharma, Director, Deloitte Consulting started the guest lecture series by delivering a talk on“Innovations in IT to achieve business results”. He enlightened the audience about the way in whicha CIO’s role has evolved in the organizations over the years. He further discussed the various drivers of Innovation in Information technology. The lecture series next had a session with Prof. Jayanta Chatterjee and Prof. Satyaki Roy. This session invited application oriented participation from the audience whereby the participants were given various scenarios involving some present issues or concerns, and they had to come up with innovative solutions. 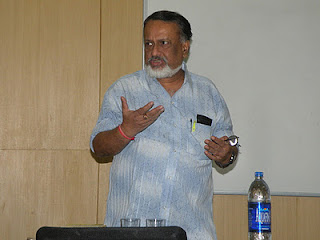 The first day had the preliminary round for the online B-Quiz also. It attracted participation from various B-schools across the country including IIMs, IITs, MDI, NITIE, IIFT etc. The B-Quiz also included mind-crunching questions based on pictures and videos, which were thoroughly enjoyed by the participants. The conclave also included a Case building Contest, whereby the participants had toformulate their own case, instead of analyzing one the traditional way. This was held in two rounds: Round 1 for abstract submission and Round 2 for the submission of the final case. 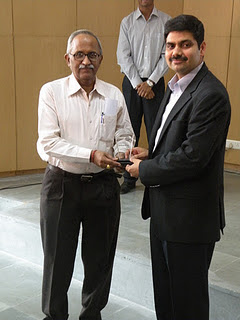 Day 2 began with a 5 hour long Innovation workshop. This workshop was organized by IME department in association with SIIC (SIDBI innovation and incubation center). Dr. Ahustosh Khanna, from IMI Delhi had been invited to conduct the interactive workshop for students. He holds a PhD in Innovation and Information Systems from the Department of Management, London School of Economics and Political Science (LSE), London, U.K. and has over 14 years of rich experience in consulting, academia and entrepreneurship in U.K. The students were introduced to the key fundamentals of Innovation such as linking innovation with economic activity, the innovation life cycle - the S curve and the Bell curve, and the wealth creation triad. The students were asked to come up with their own innovative ideas, which were then examined in lieu of the discussed concepts.

Prabandhan 2011, in nutshell, was a huge success and got word of commendation for its events from the participants.