Seminar: Dynamic Credit Rating Standards- Why do they vary over time?

Biography of the speaker:

Dr. Puneet Prakash is an Assistant professor, 2005 – current, at Virginia Commonwealth University. He has done his Ph.D in Risk Management and Insurance from Georgia State University. He completed MBA from IIFT, Delhi, PG Diploma in Development Policy (IGIDR), and M.Sc. (5-year Integrated) from IIT, Kanpur. He is also a visiting faculty to IIT Kanpur, Fall 2009.

Abstract of the talk:
In the paper mentioned, it is examined as to why credit rating standards change over time. Drawing upon the literature on certification intermediaries, it is argued that rating standards are related to the economy-wide credit quality distribution, and as the distribution changes, so do the standards. Empirical tests verify this predicted relationship. In particular, with a rise in economy–wide dispersion of the distribution of credit quality, rating standards become more stringent. However, an increase in mean probability of economy wide default risk has the opposite effect. These findings are robust to not only alternative specifications of measures of location and dispersion of the economy-wide credit quality distribution, but also to the stickiness in ratings. 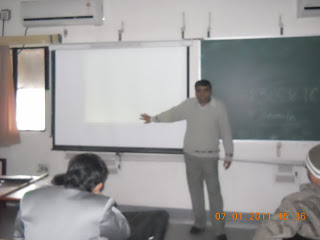 Dr. Puneet started the discussion by explaining the motivation of the CRAs (Credit Rating Agencies). He explained that the topic has a keen association with the long-term debts. When a firm seeks for some investors, investing companies want to know the credit-worthiness of these issue companies. He then explained the role of CRAs in the society in this context. He explained that a Credit Rating Agency acts as:
a) An information intermediary to come in and analyze Balance Sheet of the issuer. It removes information asymmetry between the issuer (firm seeking for debt) and the investors
b) A monitoring unit: It charges a fee for the service it offers in this respect
c) A Certificate intermediary: It provides an assurance of quality for the issuer.

He next moved on to mention that a credit rating agency takes into account, how much money of its own the issuer is putting into a debt. CRAs have a role of increasing social welfare, collecting information and disseminating it.

The next major topic that he discussed was CRAs and the current crisis they are facing. He explained that in the current scenario, many companies are frequently changing their standards to maintain their market shares. He indicated that these companies have started ignoring interest rate changes in the economy. And as a result, CRAs also ignored interest rate risks. As of now, though, CRAs are regulated much strictly.

Next he came to the main Research Question. He explained a few concepts with the help of three research papers, as enlisted below:
• Blume M., F. Lim and A C MacKinlay (BLM), 1998, “The declining credit quality of U.S. Corporate Debt: myth or reality?”, Journal of Finance, 4, 1389-1413
o Rating Standards become stricter over 1975-1995
• Zhou, 2001, “Credit Rating and Corporate Defaults”, The Journal of Fixed Income , Vol. 11, No. 3: pp. 30-40
o Rating Standards become lag over 1981-1998
• Gordy and Heitfield, “Estimating Default Correlations from Short Panels of Credit Rating Performance Data”, 2002
o Rating standards are time-varying, to explain rating through the cycle

Dr. Puneet followed Gordy and Heitfield (as highlighted above), as the base paper to next explain as to why do CRAs vary their standards over time? He explained that standards are dynamic because they are tied to the underlying economy wide credit risk distribution. So, one should not expect any trend over time. He mentioned that when the average quality of companies as a whole declines, standards are lowered (market share argument). In this case, the CRAs believe that if they do not lower their standards, they will lose their market share. This is due to the fact that the client may get a good rating for more defaults from another CRA in this case. He also argued that as the dispersion of the distribution of credit quality rises, standards are tightened (reputation argument). As its implication, it becomes evident that rating standards have no trends. Instead, these are tied to the underlying risk distribution.

Dr. Prakash then went into the theoretical underpinnings of the model used and developed in the research paper. He stated that a Rating agency is a profit maximizing firm. It is also assumed that a market is characterized by information asymmetry. Ultimately, the problem reduces to a Seller’s problem:
Max (θ – c (θ, t) – P); where θ: debt
C: Cost of obtaining θ
t: Efficiency parameter
P: Price a seller pays to the CRA

Hence, the dispersion of the distribution of credit quality is taken as a scaling parameter.

He further introduced the issues of measurement where certain mathematical models were explained, based on the Merton model. A ‘Rating Agency model’ was introduced as an econometric model. It was mentioned that the rating thresholds represent the standard different CRAs have. For example, a rating of AAA may mean 10 default points for one CRA while 8 for the other.

The last part of the seminar was the Q/A round, where Dr. Puneet addressed to the students’ and faculties’ queries. The seminar closed with a vote of thanks by Dr. Subhash C. Misra, Faculty, IIT Kanpur. The session proved to be very informative for the students, as they become aware of the major forces affecting the functioning of the rating agencies in a free economy.