Finatics is the annual financial conclave of the Industrial & Management Engineering Department at Indian Institute of Technology, Kanpur. Into its third year, this conclave aims at bringing about industry experts, eminent professors and students together to discuss Finance – the science of managing funds. The event was held over a period of 2 days, and comprised of guest lectures, simulation workshops, and a host of competitions.

“Dealing with change – in the aftermath of the global financial turmoil”

We tried to look at organizations which survived the financial crisis, and the processes that were followed to retain profitability and competence.
The event kicked off on 10th morning with an opening speech by Dr B V Phani. The faculty coordinator for the event, Dr Phani welcomed the speakers, and exhorted the students to make intelligent use of the wisdom that was going to be shared over the weekend 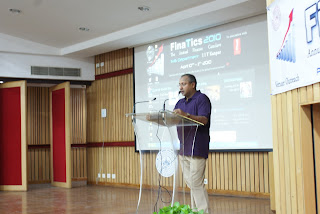 The first session was conducted by Mr Aditya Kaul Dullo, who is an alumnus of the IIT Kanpur MBA programme (2004 batch). Aditya handles sales & marketing for a leading multinational bank's credit cards division. He talked at length about the credit card industry, its workings, and how it obtains its profits. 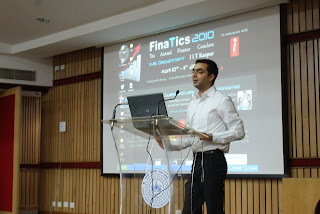 The session then focussed on the effect of the recession on the credit cards industry, which is based on wafer thin margins. With dwindling profits, it was time for the industry to pull up its socks, and take some drastic measures to regain profitability.
The lecture invited a barrage of questions, from students and faculty alike, due to the very lucid and engaging discourse by the speaker. It was heartening to see a former alumnus inviting queries from students & faculty members alike, some of whom had tutored him half a decade before.

In the end, due to paucity of time, the audience was gently requested to carry on the discussions offline! Dr Phani, while thanking the speaker, lightly commented, “Whatever way we look at it, recession is good for the industry – the banks started performing better, and the customers started spending prudently!”

The next session was taken by Mr Dipankar Ganguli, an adjunct faculty and a practising Chartered Accountant of repute in the city. 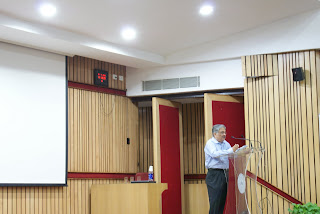 Mr Ganguli talked about the intricacies of the 2010 Budget, what were key points, and how it is going to affect businesses nationwide. This lecture made us appreciate the budget in its entirety, compared to how we look at it based on newspaper reports. There are subtle nuances which affect the decisions made by the country’s top politicians, and Mr Ganguli tried to analyze most of these.

Post lunch, the next session was taken by Mr. Avik Bhandari. Avik is a passout of the batch of 2006 from IIT Kanpur, and has worked in the likes of erstwhile Lehmann Brothers and Royal Bank of Scotland. 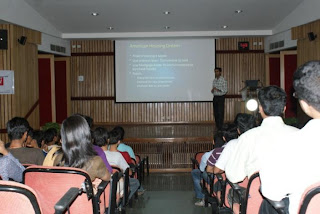 He develops business simulation games which aid in the sound understanding of the fundamentals of finance, while entertaining the user. Talking at length about the financial crisis using basic fundamentals of finance, Avik also displayed a comical take on the entire scenario. Listening to him was a refreshing and motivating experience, as he has achieved considerable success at a very early age.
The evenings were reserved for Online competitions. As soon as the clock struck 10, IITK servers were literally bombarded with requests, as B-school students and professionals logged in all over the country to play Finsense, the online financial quiz. The 1-hour quiz marked the end of the first day of the conclave. The quiz was won by Abhidan and Vishnu (Team Abhi).

Sunday morning brought us face to face with Mr. Ajay Pal Singh, another alumnus of the IIT Kanpur MBA programme, from the pioneer batch (2003). 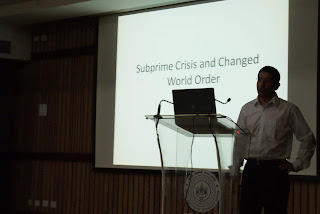 Ajay works in an international bank, and spoke about the subprime crisis and the changed world order. Hearing it from an industry veteran, who was there in the thick of things when the entire scenario was unfolding, was an experience in itself and some of the facts revealed were truly eye-opening. Ajay spoke about how it happened, the reasons behind it, and how it has affected banking institutions worldwide.

The final guest lecture was delivered by Mr. Saurabh Sood, CEO of MarketTopper, a company engaged in Financial Instrument research and the development of advance – featured Trading Systems. 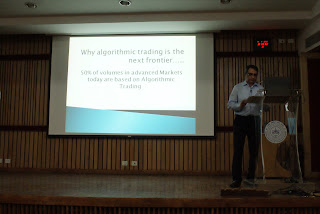 Mr Sood spoke about algorithmic trading, which is an innovation in the financial domain and comparatively a new phenomenon. Algorithmic trading is the use of computer algorithms for entering trading orders without human intervention. Mr Sood predicted that algorithmic trading would change the way the world trades in a few years, and the correct and prudent use of algorithms might have resulted in a different scenario in 2008. However, he also warned that any algorithm or program is only as good as the inputs given to it, and the authenticity of the inputs was essential to come up with the best decisions.

The post lunch session on Sunday was reserved for a business simulation workshop, again by Mr. Avik Bhandari, who organized DealStreet, a financial strategy board game, which combined fighting for oil resources, speculating on changing stock market indices and the fun of fighting drug lords and gambling in Las Vegas. Needless to say, this game was immensely enjoyed by all the participants.

The event concluded with the online crossword Fintuition, which was won by 1st year IIT Kanpur MBA students Siddharth and Nitin (Team FinWiz).

Finatics 2010 proved to be a learning experience for all the participants – be it due to the knowledge shared during the guest lectures, the informal night sessions with the speakers, the simulation workshops or the highly competitive quizzes. The event surely will now be considered a benchmark when planning further flavors of the same, or of Prabandhan, the annual management conclave from the IME Department, due to be tentatively held in September !

The IME department thanks all the participants and speakers for making this event a resounding success.