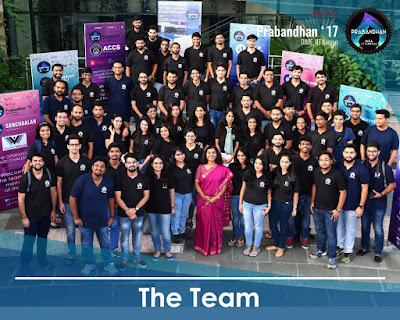 The Department of Industrial Management and Engineering, IIT Kanpur played host to one of the most ambitious public events in the department’s recent history in the 6th edition of Prabandhan, its management conclave, organized by the resident MBA students in association with Uttar Pradesh Tourism and Business Standard. The course of these three days, saw seamless execution of a well-planned extravaganza in a motley of various elements. Pitting the best among 4560 students from 46 premier business institutes against each other, it provided opportunities for embodiment and on-field application of theories and models from academia. It served as the platform for three days of complete co-creation and ideation among leading experts in respective fields to the aspiring managers, and was absolutely prismatic in its coverage of all industries and a bountiful spread of management sciences including Marketing, Analytics, Finance, Operations to Human Resources and Corporate Strategy.
The first day of Prabandhan set the ball rolling with an address on ‘Career Building in front of the Wave’ by Dr. Anindya Chatterjee, Professor with IIT Kanpur. He addressed the monophonic job market and the edge of the current generation has over the upcoming wave in terms of disparate ideas and that little bit more wisdom. Day 2 had an array of events lined up. Sanchaalan, an event of operational excellence , concerned with the nitty-gritties of getting your hands dirty with the specifics of achieving objectives saw winners in Team Visionaries from NITIE, acing a getting your hands dirty with the specifics of achieving objectives, adjudged by experienced members of the cold chain community in Mr. Alok Shrivastava and Mr. Namit Chawla of Waterwood Cold Chain Solutions. Markovista, the marketing event, dedicated to the memory of Professor S.S. Mishra, witnessed the victory flying to Team Strykers from IMI, Delhi as adjudged by Mr. Utsav Rawat, Head of Marketing Novartis, Ms. Abidha Shukla, Digital Marketing Manager, Polaris and Pankaj Dubey MD of Polaris. Regnant Populi covering human resources and abrupt layoffs, was bowled over by Team Serendipity from IIM Ranchi presided over Dr. Amit Shukla, professor with the Department of IME and Ms. Shruti Chadha, Senior Editor with Human Capital Magazine. Day 2 was drawn to a close with the insightful event Reflexions which saw a panel discussion in the presence of 6 eminent personalities and thought leaders of their respective industries in Mr. Sreeji Gopinathan from Reckitt Benckiser, Mr. Utsav Rawat, Mr. Satish Mittal, ex-CTO of Vodafone, Mr. Dinesh Modi, of Eros, Dr. Devlina Chatterjee, an insightful member of the Department of Industrial Management and Engineering, moderated by Ms. Mitali Mukherjee, Co-Founder and Editor at Money Mile. Savants of their respective fields, they spoke extensively about the bridge between academia and its applications, the paradigm shift that the jugaad culture could see, if India had the gumption, patience and brawn to take the leap of faith at the right time, and most importantly the responsibility to identify the right problems to drive inclusive growth among the entire country as a collective, even bringing forward candid examples from their lives. Day 2 carried on the juggernaut with ACCS which saw winners in Team Masterminds from DMS, IIT Delhi take away the spoils in the presence of Dr. Devlina Chatterjee and Mr. Bhargav Errangi, CEO and Ms. Aditi Agarwal of Spoyl. Vittraj, the flagship event for Finance, saw Team Blackrock from MBA, IIT Kanpur take the crown in battle for the knowledge of cryptocurrency refereed by Gaurav Dubey, CEO and Veeresh Singh, Business Process Manager with InfoTech Hub. Consulere, the consulting event presented a unique live case study to its participants with their acumen being observed by Mr Vaibhav Gupta, Group Head – Finance & Audit, Shri Lakshmi Cotsyn Limited and Dr Sunil Dhole, Cofounder Technorbital Advanced Materials Pvt Ltd and Technical Director at E-SPIN NANOTECH. This event saw Team Valar Dohaeris from IIT Kanpur emerge as victors! Game of Auctions was the final event of the day, the first of its kind, testing the perseverance of participants. In-house team from IIT Kanpur, the Golden Company, took the podium presided over by Dr. Vipin B and Dr. Shankar Prawesh of IIT Kanpur! Prabandhan also had standalone talks by Mr. Dinesh Modi and Mr. Bhargav Erangi, where students were offered varying insights on the putting numbers on creativity and taking the leap of faith with your creativity.
Along with the flagship events, Prabandhan 2017 also included a palatable selection of online events, which saw immensely popularity amongstudents across India. Events such as BizQuiz, the business quiz event; Tag Wars, the tagline naming event; Guesstimaze, which tests the numerical boundaries that one can operate in while exercising a degree of logic; Top Deck, the presentation event and Snap That!, the photography event clocked in impressive participation numbers across the board, with thousands of students enrolling online to compete. Along with these the offering stands from the resident business magazine Avant-Garde which offered a plethora of platforms for expressing their thoughts and subsequently have the article featured in the magazine. This event saw 6 different winners!
The core team, reflecting upon the event and how it presents itself in the grand scheme of things for Project MBA, IIT Kanpur suggests immense possibility of sustained growth driven by the ambitions of the students and the department. With elated fervor among the range of populus the ‘who’s who; of the Industry and  ‘will be’s from B-schools such as IIMs, IITs, ISB, XLRI, MDI and IMT, Prabandhan 2017 proved to be a true extravaganza for the show case of immense talent. After all, the art of finding simplicity among clutter is the true finding of the student of management science.