February 05, 2017
Leadership is one of the most desired traits for success in life and MBA students at IIT Kanpur were fortunate to get a fresh perspective on the topic from the top echelon of corporate world, when Mr Amit Kasliwal, India head of corporate sales at Ford India visited the campus to interact with the students. 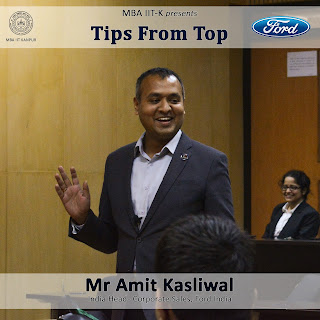 Sir described leadership as the zeal to identify and solve problems. Citing an example, sir said that India has a myriad of problems and out of those; transportation was one of the major issues. Ford is dedicated to solve this problem. Talking specifically about the corporate sales department, he told that by selling cars to taxi operators, they created entrepreneurs, thereby solving the problem of job creation at that level.

Further describing leadership, sir claimed that a leader must have a long term view, and should be enthusiastic about other’s agenda, thereby creating opportunities and ‘win-win’ situations. According to sir, and rightly so, sustainable leadership can be achieved by exhibiting the desired qualities consistently and perpetually. 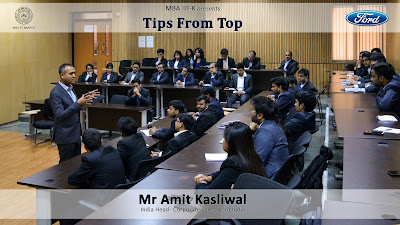 Moving ahead, sir candidly listed and lucidly explained the traits of a successful leader as the ability to prioritize in life, being conscious about one’s behaviour, ability to leverage other’s perspective by being sensitive to their feedback; and the competency to gauge people’s strengths and weaknesses. A true leader must support the weaknesses of the team members to ensure the best outcome for the team.

Sir then asked the students to think about how the world has evolved over the years, and we could reflect that life had become more convenient over these years. This according to sir was made possible by none other than the leaders of the world, who kept on solving various problems at various levels!

Opening the Jackpot, sir advised the aspiring leaders in the audience that to become ‘C.E.O.s’ they must spend time with C.E.O.s! A leader must be able to adapt faster and must not get carried away by extreme situations. This trait, according to sir was evident in Virat Kohli, current captain of the Indian cricket team. Further, Sir said that it was important for a leader to build trust by meeting the commitments, which in turn should be made by thinking properly before doing so.

Sir ended the enlightening session by motivating the audience to take the charge of their lives by taking the ‘remote control’ in their hands because the key to success according to sir was this consciousness about one’s life. 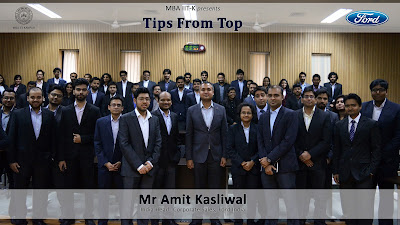