August 27, 2011
After a month long storm of unending cases, presentations and surprise quizzes, MBA freshers got their first opportunity to party at IIT Kanpur. The much awaited fresher’s party was thrown by seniors on 20th August at the old Students Activity Centre of IIT-K. The welcome party was marked by mile wide grins and high spirits with Rubal and Arpita being the comperes of the night.

Each of the juniors had to take the stage one by one but the catch was to ‘Strictly come Dancing’. Everyone got to see the widest range of dance forms at a single place ranging from salsa, bhangra to someone barely shaking a leg. 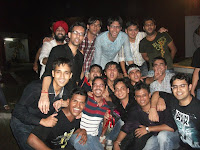 The seniors pitched in to break the ice and convince even the most resolute. Then, everyone had to introduce themselves, where juniors were asked about their relationship status, interests etc. People came up with amusing responses for status ranging from “Complicated” to “Confused”. Each of the junior was given interesting tasks to perform and showcase his/her talent as a means to judge for Mr. And Miss Fresher 2011. The juniors got to see the other side of the seniors as there was healthy ribbing and teasing as proposals flew to some of the ‘eligible’ bachelors and bachelorettes of the senior batch.
This was followed by two brilliant performances presented by the junior batch. One of them was ‘Choreography’ that weaved a story through silent acting and songs, which really fascinated the audience. 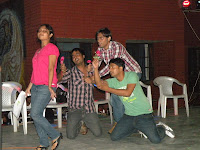 Another performance was a skit which had mimes of Bollywood stars like Amitabh Bachan, DevAnand etc. Finally, ten people were shortlisted for Mr. Fresher and Miss Fresher title. The next round began with Question & Answer which tested impromptu response and novelty of ideas. Finally, Himanshu and Vijayta bagged the crown. Also, Vivek, truly deserving, walked away with the title of the best entertainer of the night.

Music at DJ enticed all to shake their legs and what not. The MBA batch let their hair down and raised the temperature. 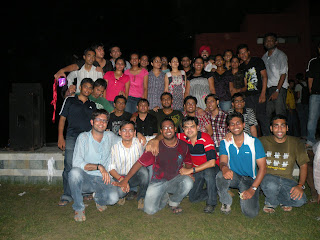 Along with it, people headed for the delightful food. The party manifested exuberance and zeal at its full flow. It marked the beginning of both celebrations & hard work that students would be encountering for the coming crucial two years at IIT Kanpur. The medley of song, dance, light hearted banter and feverish dancing highlighted the true spirit of MBA@IITK where everyone dances to the music but on his own tune, where the world comes to a standstill as you take the stage and show your hidden talent. The junior batch discovered many a hidden talent as well as a deeper connection to the senior batch through Fresher’s Nite 2011.